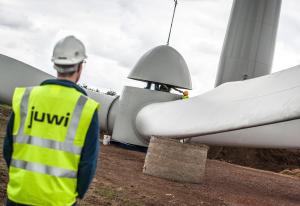 Last week we posed this question to Jan Sisson, Managing Director of Juwi Renewable Energy. We travelled to King’s Lynn, the home of one of their projects for client KL Technologies.

Juwi provide specialist, renewable energy solutions for a wide range of clients. For instance, they design, manufacture and assemble solar panels and windmills to generate energy for their clients. They then provide support afterwards to monitor the systems energy levels. After the initial expense, renewable energy provides a cost-effective way to generate electricity and reduce carbon emissions.

Jan gave us a tour of their site and talked us through the production process of the hundreds of solar panels and the gigantic windmill there. You may not know that solar panels work effectively even when it’s cloudy. I was also impressed by the speed the windmill was turning at, although it was quite a still day. I was told that the windmill was assembled in 3 sections, using a crane and with engineers on harnesses fixing the parts together.

Jan has worked in renewable energy for around 20 years and his passion and knowledge made for a very interesting interview. He mentioned that Juwi was a German company, and that Germany is around 10 years ahead of the UK in terms of renewable energy.

I also asked whether the result of next years’ General election will have a major impact on the UK’s renewable energy. Jan said that the Conservative’s hadn’t lived up to their green promises and mentioned that Labour and Lib-Dems are traditionally more pro-renewable energy. So perhaps a Labour/ Lib-Dem coalition may make for the most advances within renewable energy.

Jan explained that the UK actually has a better wind resource than Germany. So the potential is there. However, in the UK, there is traditionally local resistance to new windmills. Some see it as an eye-sore and don’t want one in their area. I’m from Yorkshire and there are two parallel lines of windmills in the countryside near me and I think it adds something to the natural beauty of that landscape. Jan mentioned a resident near one of their projects, asking how much petrol the windmill took to operate! Whilst this sounds funny, there is a lot of ignorance and misunderstanding about renewable energy.

At present rates of oil consumption, oil will run out within 40 years. The world’s population is growing, and decreasing usage of fossil fuels is crucial. For this reason, political parties like UKIP who are against windmills on principle, baffle me. As did Rupert Murdoch when he was interviewed on climate change recently; and he was sceptical to say the least. Jan-July this year was the warmest since records began, which surely means that climate change is here, and it needs to be dealt with.

Bob Ward, policy and communications director of the Grantham Research Institute on Climate Change and the Environment at LSE, said of the figures which the Met Office confirmed, “These figures are further evidence of the impact of climate change on the UK. This should increase the urgency of UK politicians to join international efforts to reduce greenhouse gas emissions, and take measures to make us more resilient, such as boosting flood defences.”

I think more progressive solutions are needed to address climate change. For instance The Carbon Trust launched Offshore Wind Accelerator, which is an effort to bring 9 off-shore wind developers together to work towards reducing the cost of off-shore wind by at least 10% by 2015. I’ll be very interested to see what results they can get and I like the idea of bringing different experts together for the greater good. This is funded by industry and UK Department of Energy and Climate Change. The Offshore Wind Accelerator also helped to create the Wave Craft vessel, which uses an air cushion, meaning it can reach speeds that previously were unachievable. This vessel is being manufactured and will be used to optimise operation and maintenance to wind farms, thus reducing costs.

Casting aside the innovations and advances of projects like that, there have been alarming reports that climate change and the UK’s growth was responsible for recent flooding. Now surely is the time for stronger action to further aid the UK’s renewable energy production. Jan is very optimistic that 100% of the UK’s energy can come from renewable energy sources. It was refreshing to see a senior member of a company, put the environment ahead of profits. This seems to be Juwi’s ethos and is nice to see.

I asked him if the UK Government could be doing more to aid renewable energy. His answer was an unequivocal yes! The Climate Change Committee has a similar attitude and recently blamed Government for the slow progress in reducing carbon emissions.

With electric vehicles improving all the time, and the need for renewable energy urgent, I think our Government needs to step-up and mirror Germany by setting ambitious targets to address climate change. Germany has the following aims:

I’ll be very interested to look at the manifestos from our political parties, and will be reading their commitment to renewable energy closely. If you found this article interesting, please share it on social media and comment below.