Do you need a degree to get paid work as a writer? 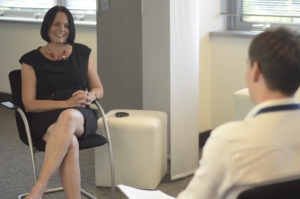 Interviewing before writing for our manufacturing documentary

Next week I’ve asked our team of filmmakers to blog about their experiences at film school and whether they’d recommend it to aspiring filmmakers. Today I’ll offer a perspective from a writing point of view.

I did a degree in Screenwriting at Central Lancashire University, which was fantastic and really inspired me to be a writer. Throughout this course I gained great experience at pitching, networking and of course, in writing. I developed my writing through the course projects, and also wrote lots of extra projects in addition. I was very lucky to land a paid writing commission for a short film whilst on the course. I finished with First Class Honours and a paid professional commission under my belt. So surely writing success would quickly follow?

Unfortunately not. Whilst I did receive some fledgling interest in a radio sit-com I co-wrote, it came to nothing and despite my voracious writing, things were moving very slowly. I decided to study a Masters in Screenwriting at University of Westminster. Whilst this didn’t directly lead to a paid writing job it did bring my writing to the next level. The course was very demanding and the feedback we received from the industry mentors was in-depth and brutal, but necessarily so. I finished the course with a draft of a screenplay, which was funny, but under-developed, particularly in terms of the main protagonist. It took a further 3.5 years, over 10 drafts and a Script Factory development scheme before the script was good enough to stand a chance of impressing an industry producer.

In the mean time I found myself working in telesales jobs to pay the bills whilst I worked on my writing. This inspired me to write a comedic blog about how to survive a job you hate, which in turn impressed an online magazine called ONIN London who asked me to write for them. After writing several reviews, features and interviews each week for around a year, I landed a paid writing job.

What I’m getting at is that making it as a writer is a very long process, which requires phenomenal levels of dedication and persistence. Whilst, I’d whole-heartily recommend a writing degree to learn the basics of writing, you need to prepare for a long and gruelling slog afterwards. I personally don’t think I’d have developed the work ethic, confidence and body of work without my degree and Masters. So is it worth getting a degree in creative writing? For me it was absolutely was, but that’s a personal choice that you have to make for yourself.